So happy I could be the final stop on the blog tour for Nicole Maggi's new book: What They Don't Know! Before I get to my guest post, check out the blogs on the rest of the tour: 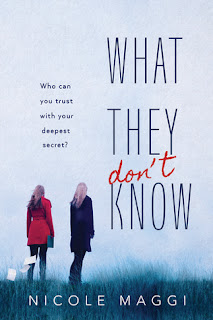 Mellie has always been the reliable friend, the good student, the doting daughter. But when an unspeakable act leads her to withdraw from everyone she loves, she is faced with a life-altering choice―a choice she must face alone.

Lise stands up―and speaks out―for what she believes in. And when she notices Mellie acting strangely, she gets caught up in trying to save her...all while trying to protect her own secret. One that might be the key to helping Mellie.

Told through Mellie and Lise's journal entries, this powerful, emotional novel chronicles Mellie's struggle to decide what is right for her and the unbreakable bond formed by the two girls on their journey. 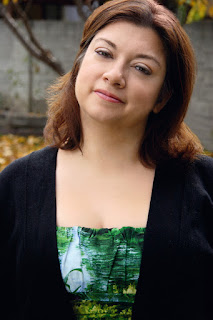 Nicole was born in the suburban farm country of upstate New York, and began writing at a very early age. Of course, her early works consisted mainly of poems about rainbows and unicorns, although one of them was good enough to win honorable mention in a national poetry contest! (Perhaps one of the judges was a ten-year-old girl.) Throughout high school, her creative writing was always nurtured and encouraged.

Now living in Los Angeles, Nicole balances writing full-time with motherhood. WINTER FALLS, the first in her TWIN WILLOWS TRILOGY (Medallion Press, 2014) is her debut novel. She has a stand-alone novel, HEARTLINES, coming out in February 2015 with SourceBooks Fire, as well as the second and third novels in the TWIN WILLOWS TRILOGY in 2015 and 2016.

So, the truth is that I'm very bad at coming up with guest post ideas, so I'm glad Nicole could take the wheel on this one. Me - a post about the relevance of your book and whether you wrote that on purpose because of the climate or if it was a coincidence

I started writing this book in early 2016. The promise of our first female president was ripe in the air, and in June of that year the Supreme Court overturned Texas’s restrictive abortion clinic law that shut down so many clinics in that state and throughout the country. For a moment, I worried that this book would be irrelevant by the time it came out.

I wrote the bulk of the first draft in the months right after the election. I think I had to turn it in the week after Trump took office. That first rough draft was filled with so much raw emotion at what had happened. When I got my first editorial letter, one of the notes my editor gave me was, “Sooo….Lise kind of feels like a mouthpiece for the feminist agenda.” And I was like, that’s ‘cause she is…Ha! Through two rounds of major edits, one round of line edits, and then a last round of copyedits, I carefully fine-tuned exactly what I wanted to say with the book. I made sure the characters were their own people, not just mouthpieces. And I was writing now in our new normal, a world where daily outrage has become exhausting, where the news changes by the hour, and where we are now engaged in an all-out war on women.

On June 27th, when Justice Kennedy announced his retirement, the book was long since finished and on its way to the printer. But I emailed my editor and asked if I had time to make changes. I wanted the book to reflect the future that it would be released into, one where abortion is illegal in half the country, which is what will happen if Roe v. Wade is overturned. She told me I had two days to make changes. I did it in one day. So that is the reality in the world of the book. It’s set about 30 seconds in the future.

So the book is a product of both climate and coincidence. But I’m not really sure I believe in coincidences. Reproductive rights has always been one of my priorities. My mother fought for them, and passed that legacy on to me. I think it was inevitable that I was going to write about this issue some day. And I think deep down, even though I believed that things were getting better for women, I knew that this was still a fight that I was going to have to shed blood for. Even if we had a female president right now. I knew this issue wasn’t going to go away. There’s a scene at the end of the book, where Lise is facing off with an anti-choice classmate, and she says, “the two of us…facing off across a gulf of pro-choice and anti-choice that I don’t think will ever be bridged, at least not in my lifetime.” And that’s how I feel. This is a war that we have been fighting for over 40 years and I don’t think the end is in sight.

I had no idea how timely this book would be upon its release, and I wish it wasn’t so timely. But because it is, I hope that people will read it with an open mind. I hope that even if that gulf isn’t bridged, that people at least start to have an understanding of the people on the other side.

This is a rafflecopter giveaway with 2 prizes: each person will one signed copy of What They Don't Know (personalization will be available, as the copies are coming from Nicole herself!). THE GIVEAWAY WILL RUN FROM OCTOBER 2ND UNTIL OCTOBER 11TH, US ONLY!